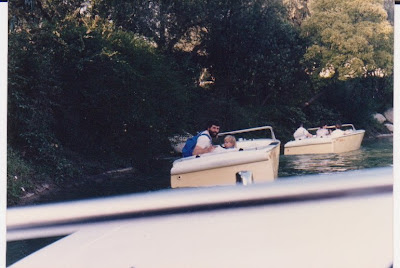 I know, I've been boring everyone with musings about the old pictures I was looking through. I'm sure there is a point coming somewhere about what I was actually looking for. But that picture above was an amazing find! I started wondering...where is that taken? Could it be the defunct Disneyland motor boats? No, it can't be. I didn't think we ever rode them. I began my hunt. I found a magnifying glass, maybe the writing on the boat would tell me. Nothing...then I searched and found my jewelers loupe. Still nothing. There was no telling markers in the photo. Gene said, it couldn't have been Disneyland since the boats were the same color. I thought, well, sometimes the Autopia cars are the same color. I gave up on the photo and started combing the web. There were not too many pictures of the motor boat ride. I did find out that it was at DL from 1957 - 1993. There was clue #1-it could have been the boats. The picture is of Gene and Geno. Judging from Geno's hair it would have been in or around 1985. Probably that summer because Gene went to China and the kids and I stayed with my mom (who lived in Santa Ana). We swam a lot and Geno's hair was an amazing blond color. I searched more and found one site on the web that had boats that looked like the same boat. But this wasn't enough. Then I dug through the box that was labeled Dad (Mary put these boxes together) and sure enough there was a photo of Gene and a friend with the same shirt on and the same back pack. They were sitting at the Carnation Cafe. There was no doubt now. The picture was from a Disneyland trip we took with another family in the mid 80's. Wow. I feel so nostalgic. I can't believe we road the boats and I really can't believe we forgot that we did it. Memories are a wonderful and sad thing. But that is the proof! I guess we went to DL more than I thought. 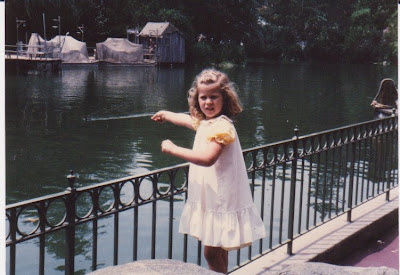 A couple more just for the fun of it. There is Mary in one of those dressy dresses! Some habits are hard to break! But just like her daughter, she loved the ducks! 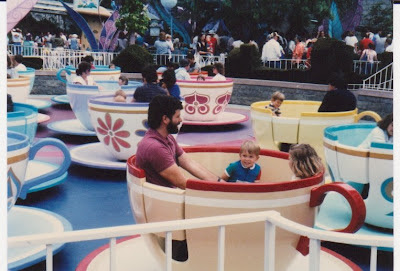 Don't you just love the tea cups! What a great idea for a ride!

If you would like to read more about the motor boats click HERE.
Posted by Pandora Lee Pensiero at 6:00 AM