Were were the cameras? 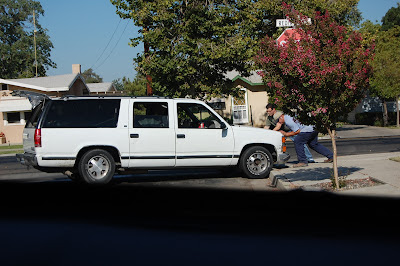 Last night, on our way home from work, it was really HOT! We had to go to the post office to drop off letters because the letter carrier never comes in anymore (remember the old days? You know...through rain, snow, etc - sorry, that was an uncontrolled rant starting). On our way back from the post office we see this car askew along the road. There was a young lady in it who seemed in despair. So we turned the corner and came up the road behind her to see if there was anything we could do. As we got there (it took a few minutes) it looked as if no one was in the car. Gene got out and went over to investigate the situation and then she came back. It looked like she was going to walk somewhere. She had a pretty big baby in her arms. Poor thing, he looked like he could get heat stroke very easily. Anyway, it turns out that her reverse quit working and she needed a push into a position where she could go forward. Gene, the white knight he is, said he would push her. Just as she gets the baby back in the car seat and they start pushing another angel shows up. I don't think Gene and the girl could have done it alone. She looked weak and Gene has a injured vertebrae in his lower back. Gene explains the situation to the other guy and they both push the truck into the middle of the street. She was able to start her truck and drive off. How nice to be part of the "good" side of man! As I was there, I was wondering...where are the camera's. Where is the hidden ABC cameraman trying to see if anyone would help? Then I thought...I have a camera and a blog! Walla! Famous! 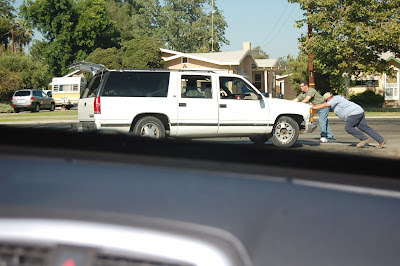 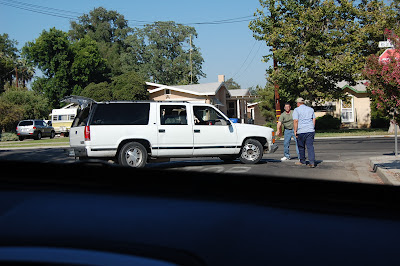 Today just happens to be Gene's birthday! HAPPY BIRTHDAY HONEY! You're the best!
Posted by Pandora Lee Pensiero at 6:00 AM