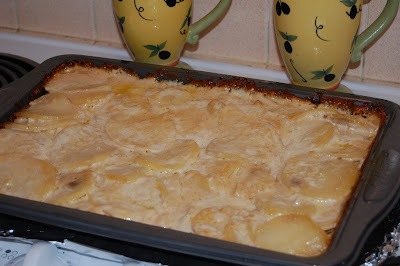 A friend sent us a recipe she thought we would like. Might look a little gross, but it was delicious. We learned something along the way...and being the nice person I am, I will share it with you.
Now, before you say "of coarse you buffoon, you don't do THAT", let me explain. Because it is a Disneyland recipe, I MISTAKENLY figured they would know what they were talking about. So here goes.
This is a tip for the recipe shown HERE. I don't want to recopy it because of possible copyright violation. It's called Yukon Potato Stack With Gruyére and Parmesan Cheeses. It made my house smell wonderful. It also took 3 hours to go from ingredients to plate. And it didn't look anything like the picture on the web site.
I digress...
So, we put it together and followed the recipe. When we got to the plastic wrap part, I thought "can you put plastic wrap in the oven"? Gene thought "can you put plastic wrap in the oven"? We looked all over the store and bought the one we thought would be ok. Well, it wasn't and you can't! We cooked the potatoes, went out to the office to finish up some work, came home and low and behold the plastic wrap melted into the food and all over the oven. We were just sick about it. Of coarse we couldn't eat it. What makes matters worse was that we couldn't use the oven either. But wait for it....(finishing up the previous story, we went to Subway and had an "OK" sandwich)
Later that night we thought we would drown our sorrows with some chocolate chip cookies. Gene turns on the oven and ta da....the house was instantly filled with toxic smoke! So, open went the windows (in 100+ weather), on went the fans and off went the oven! No cookies for us!
The next morning Gene was up early working on his study and decided to self clean the oven. (he doesn't tell me this for days later) He puts it in self cleaning mode and proceeds to sit down at the table to study. He looks up and sees a flame in the oven! (now, this is an ELECTRIC oven)
Not knowing what to do, he turns off the self cleaning, and it slowly goes out. (this is a fairly new oven) It seems you have to manually clean out the melted plastic, which is not easy! He went on line and found out that ammonia soaked rags on top of it will do the trick. You can guess the rest....lungs that can't breath, etc. To make a very long story shorter, he got the oven cleaned and we can cook again! We decided to try our hand at the recipe again which is what you see above. Our meal was a very nice one... 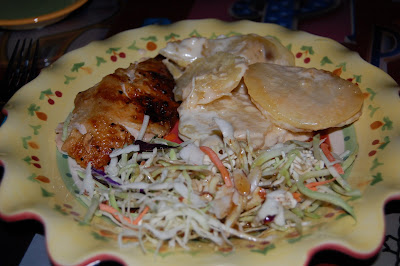 Baked chicken, almond cabbage broccoli salad and Yukon Potato Stack With Gruyére and Parmesan Cheeses! Very yummy! (not to mention costly!)
*if you make this recipe DO NOT put the plastic on top first*
Posted by Pandora Lee Pensiero at 6:00 AM