It's time again for Family Camp!  For years our church has done a family camp.  I think this was our 13th year, or there about.  (However they weren't in order, there were years in the middle where we didn't have it due to something with the YMCA, but that is not important right now)

Some years we would go up for all weekend, but this year we went up for Saturday only.  Our church does so many great things.  Everyone loves Family Camp when they come!  It is like no other! But, I will do a post on what we do, but this one is about finding a life bird!  I posted a while ago that I had started birding.  I have many wonderful birds that come to my yard, but in the summer it is pretty much the same every day.  We went out in the spring but the summer here is so hot that I just don't do well outside for very long.

We were free this year to go birding around the lake.  I was surprised how very hard it was to find any birds.  Either the time of year, or the loud voices, or something seemed to keep them away.  My son gave me a pamphlet that said what kinds of birds were at the lake and how often.  I was so excited to set out on a trail and find them!

It was a very good thing that we took a dear friend named Linda Harris with us.  She was a real birder who knew things that we didn't. (we don't know much) She came along for the one hike we did. 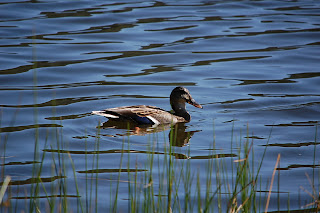 First of all this girl was swimming around the lake. I think it is a mallard.  There were two of these last year, but this year there was only one.  It made me sad that she seemed all alone.  She was very friendly and not shy of the kids and loud people around. 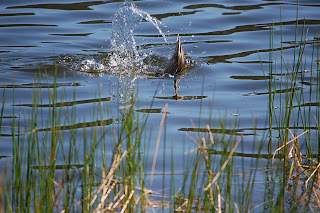 I really love this picture!  I caught her getting some snack.  I affectionately call this "bottom's up!" 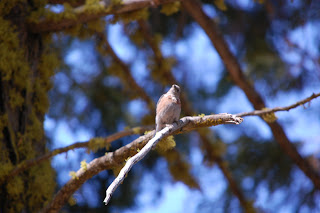 Then we saw this bird.  I have to admit.  I thought it wasn't much but Then Linda said it was a Western Blue Bird....WHAT?  I figured there were no blue birds in California. 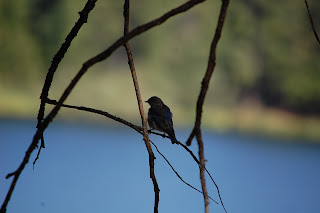 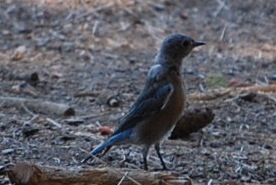 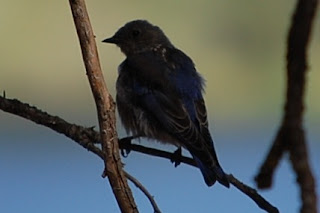 I wish the lighting was better, but I think it was a female she had the red breast and grey upper and we could see blue when she flew.  I was pretty excited about that...but there is more! 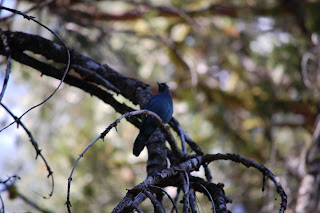 We heard these guys, but finally caught a photo.  A Steller's Jay!  Yes they are bossy but they have the crest which makes them special to me! 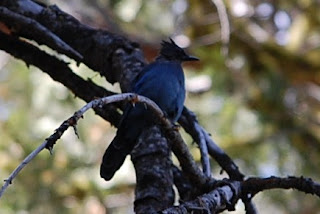 Then we saw several of these 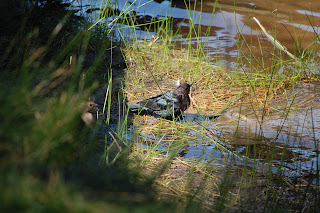 The dreaded parasite bird-Brown Headed Cow Bird.  Yes this male is very pretty, but they are terrible birds. Read about them on the link mouse over the name. 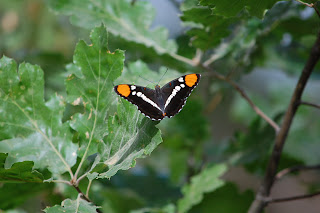 I'm teasing you now, but it is a beautiful tease.  These lovelies were along the trail.  I was going to try and identify them, but that is harder than you think. 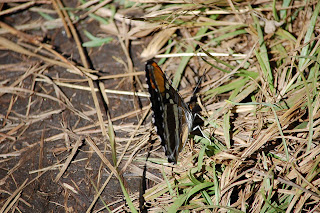 There seemed to be a lot of butterflies and dragon flies.  Then while walking back I had to sit on a table to rest and I was staring at the trees.  I saw something moving.  I said to Gene....look there is something over there.  He was thinking, it is a lizard but I'll take a photo.  I couldn't believe what it ended up being.  If it weren't for Linda I would have figured it was a wren or something. 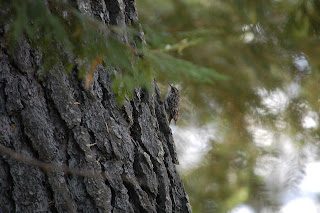 There was this little bird that blended into the tree so amazingly.  It was traveling up the tree poking his nose into the cracks of the bark.  I'm guessing it was eating insects. 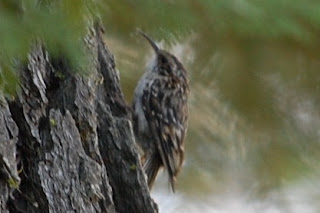 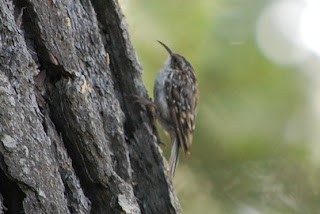 Look at him!  (or her) It's a Brown Creeper.  The pamphlet said it was uncommon around the lake.  I felt so excited.  Like I found a priceless treasure!

I was hoping to see the Bald Eagles that people saw last year, but there was no siting this year.   But truthfully this little guy made up for it all!  We did find this nest, but it seemed abandoned.  Maybe next year we will find someone using it next year! 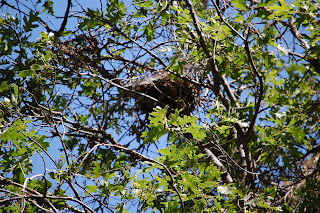 All in all it was a wonderful day!  And I am hooked on birding!  Last night we watched the movie The Big Year.  It is a must for us birders!

Posted by Pandora Lee Pensiero at 11:47 AM