Year of a Million DREAMS....or kind-of 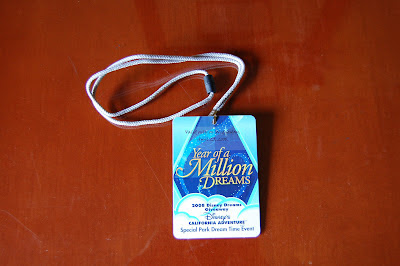 While at Disney's California Adventure, we decided to ride the Maliboomer before it is taken out (late 2010 or early 2011). Plus, one of the things we try and do at each trip to Disneyland is to try something we haven't done before. So while exiting the Maliboomer there was the Dream Squad at the exit... holding these(above)! At first we thought they were the Dream Fastpass that we have won before, but they were not. :-( Instead it was a ticket to a "special Dream Time Event". The article linked is better written than I do (remember, I am best at math). Here is what happened.

First, this is what the back of the ticket says:

Have you ever dreamed of staying in a Disney Park after closing time to experience the magic just a little bit longer?

Well that dream is about to come true during tonight's Special Park Dream Time Event - Created just for you as part of the 2008 Disney Dreams Giveaway.

Ok....so that this meant is.... At closing time (on this day it was at 8:00 PM) go over to the stage area just outside Monster's Inc. There are benches set up. While you wait a DJ comes and plays loud music and ends up making you get up to dance. They do this for 30 minutes while they clear the park out. It is a cute fun time, if you have kids and don't have dogs that are barking. Finally after all the hype they let you out and you have an hour to go on ..... wait for it..... whatever ride you would like. they deem good enough to be open.

So you have to wait over by Monster's Inc. which is not far from the Hollywood Tower of Terror, which just happens to be our favorite ride. Ok...so we think, we'll bop over there ride it then trek over to Screamin' loop around to Soarin' then maybe another ride on TOT (or maybe two).

We go over to TOT and there is a long line. (now, it wouldn't be a big deal, if they were open and/or running more than the one part of the ride) We waited, waited, then decided our whole hour was being eaten up. We decided to come back and go on to phase 2, which was Screamin'. If you are familiar with California Adventure you already know it is a long walk to the other end of the park. There is only one way to go, no short cuts. So we started our trek and got to the pier area and started looking at the roller coaster. We didn't see any cars....started walking slower, then spied a group of teens and asked them if Screamin' was going....they said...."their having technical difficulties". Ok, so now about 20 minutes of our free hour is gone. We decided to go back to TOT, because that is our favorite ride and just wait. We got back and the lines were gone. We went into the room where they run the Twilight Zone short. There were only 2 other people in the room besides us. That was cool, kind of like a private showing. Then on to the elevators. We get on in the front row, but they did wait for others. The problem is that it takes 13 minutes to go through the ride. So, I know you are doing the math. We rode the ride and we asked to ride again (without going through the whole thing again....which is what the bell hop at the beginning told us to do), well, no such luck. Even though there were no others there, they didn't let us ride again. We had to get off, walk around then go back on, wait for others, you get the idea. We rode it twice, then it was time to leave. 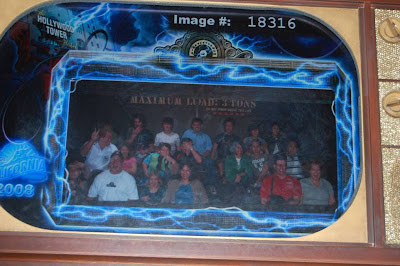 All in all, we had a great time. But not because of this little "dream" but because we were with each other. At one point we were the only one's on the Hollywood Backlot street which was a little strange. I think the thing I have against the event was that the stores were not open, so you couldn't buy anything to eat. (we had missed dinner) Many rides were not running. I already talked about Screamin', but Monsters Inc. was not running. That seemed dumb since there were lots of kids that would have enjoyed that ride. We never made it over to the Pier because it was just too much walking and we were unsure if anything was even operating. Then other children things were not operating, like Turtle Talk with Crush.

So here's my thought, if anyone is out there. How about leaving the park open 2 hours, I mean what would it hurt? Disneyland is open 2 hours later. California Adventure is a big long drawn out park and it is hard to walk wherever you might want to go quickly in 1 hour. Also, the whole "dream" stuff is a little useless. It is exciting to win something but this is the 4th time we have won one of their "dreams". The other times we won the Dream Fast Passes. Each time it was disappointing. The fast passes are hardly ever needed. (at least when we go) And they are only for one ride (there are 6 tabs each with a different ride). It would be better to give out a fast pass that can go on any ride all day. I mean how bad would that be? I doubt it would clog up anything.

Another point about the event. It seemed very disorganized. The cast members didn't seem to know what was going on. The ride operators did not seem to be ready for the start of the event. We didn't have our camera, which was a big mistake because Mickey and Minnie were at the exit and you could take a picture with them. There was virtually no line. Would it hurt them to have a photographer there? I know I would have bought one of the pictures.

Anyway, if you get one of these passes, bring your camera! The best thing about the event would be getting a picture with Mickey and Minnie in their "Year of a Million Dreams" blue outfits! 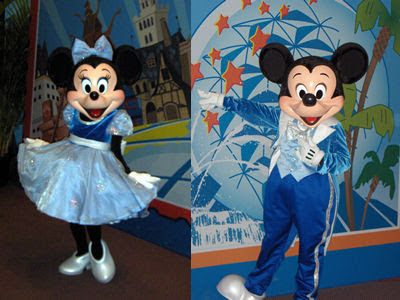 Want to know what was voted the best theme park ride in America? Click here and see!

Posted by Pandora Lee Pensiero at 11:00 AM

Now that I know the whole story I wish you had just had dinner with us - amazing Monte Cristos and Garlic Pomme Frites (french fries - ha!)-
another day...