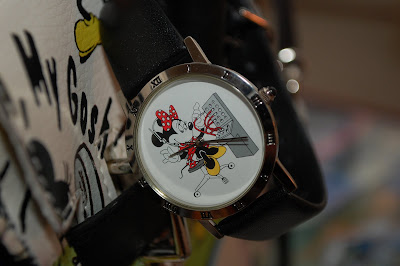 Somewhere along the line we started collecting the Disney Artisan watches. Disney produces watches (sometimes with art, sometimes without) in a limited way. It is a fun thing to collect because it isn't big and a subtle way to enjoy Disney. You can visit Disneyland and stop at the Fortuosity Shop on Main Street and watch them working on art that will become a watch face. You can order a one of the kind watch or get one of the current specials they are featuring. (holidays or other commemorative events) They even have one day issues! I especially love the band of these watches. 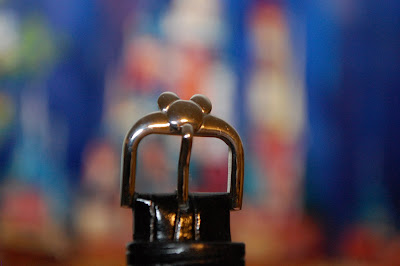 Cute "hidden Mickey"! Occasionally you find an unexpected gem on eBay, like the one above! What is so special you might ask? Well....I use to work a PBX switch board exactly like that when Gene and I started dating! When I saw this watch on eBay, I was amazed. Why would such a watch be available? Why would they produce them? and...I need to have it! Gene, being the wonderful husband he is bought it for me for Valentine's day. I wondered if it was an "art watch". The face looks like some of the ones they produce. (some have dials with the Roman numerals and some do not) It certainly looks unusual. But, I could tell it wasn't a recent one because the band didn't have the hidden Mickey.

After I won the auction, I contacted the seller and asked for a little more information about the watch. This was his response:

"Long ago I worked at Disneyland, and many Cast Members
would produce an edition of department-themed items
(watches, pins, cups, etc.) for fundraisers so they could have
holiday parties and other internal celebrations. I bought a
couple of these watches In 1997 from the Disneyland PDX dept.
One, I were occasionally; the other was stored away (but is now
yours). FYI, at some point, a few years back, the Disney
company put a stop to this type of merchandise fund raising,
because it usually involved the use of Characters (like Minnie) -
- as well as profits being made by someone other than Disney.
So, they put a stop to it. Their Team centers then began
selling department and job-themed items to incur the profit
and control the development of such items......."

Wow! We stumbled on a piece of Disney memorabilia! I was (and am) so excited about this find. But why would I want it? (other than pure "coolness" of it) Well, as I mentioned earlier, when Gene and I started dating I worked 2 jobs. One of them was at a Title Company as a receptionist. Why they had an old PBX board (I'm not that old, y'all!) I do not know. We were so in love that he would call and talk to me for hours at work. I could talk because I had that head gear on and no one even noticed. When people would call in I would let him listen in to my conversations. (he had to remain quiet!) Even now I can still remember exactly how to operate that board! So you see, it was a perfect Valentine's gift made just for us!
Posted by Pandora Lee Pensiero at 11:25 PM