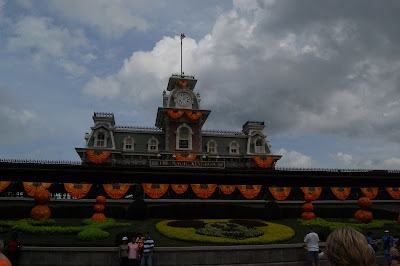 The first thing I noticed about DW in comparison to DL was the lack of decoration! We went first part of October and was stunned that there was little or virtually no decoration at the parks. There was a few banners (as shown above) and a few jack-o-lanterns on Main Street, but nothing like our own DL. There was no big Mickey Pumpkin on Main Street to take pictures in front of....wwwhhhaaaattt?! There was a small blow up pumpkin on a stand in the front of "The Magic Kingdom" when you came through the turn styles. But there was no real picture spot. This was a tad disappointing since, next to Christmas time, Autumn is the most beautiful time in DL. Funny, but I expected everything to be bigger and better! 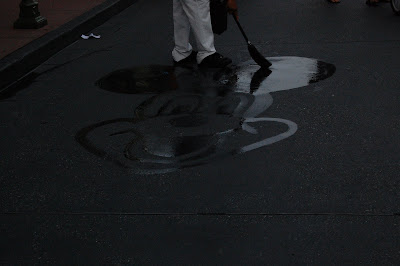 We were greeted by this though! No one ever does stuff like this at DL. (at least I have never seen it) The street "washer" was washing Main Street in the form of Mickey Mouse. That was a truly amazing thing to me. We were off to a good start after all! No pumpkins, to mention, but other amazing stuff.
Main Street was familiar but different. It was about twice as wide. As a person with M.S. that was nice. It didn't feel like people were up on my heels all the time. Now, we were there in the "off season", so maybe it feels much like our own DL in the summer. But for us, it seemed spacious. There were good and bads to this. First of all it was great the uncrowded feeling was great but there seemed to be a lot of unused or unexplored space. Everything was spread out better, but there wasn't as much "magic" crammed in, if that makes since. We came in and had lunch at a restaurant located where the Opera House and Great Moments With Mr. Lincoln are located in DL. 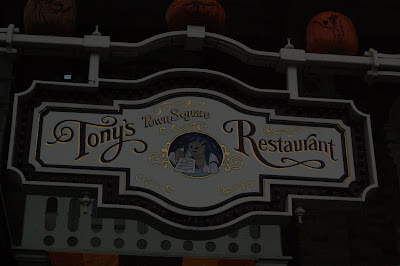 Tony's Towne Square Restaurant was AMAZING! We had a wonderful lunch and even enjoyed all the Lady and the Tramp stuff. I will say that all the food at DW was way better than at DL.
After that we were off down Main Street. I didn't get far and I noticed that they were cutting silhouettes. 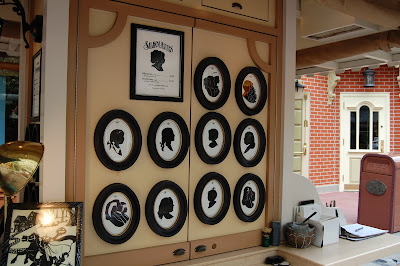 Of coarse I had to get a couple of silhouettes cut! As you know, I have a massive Silhouette collection. You can read about it here. 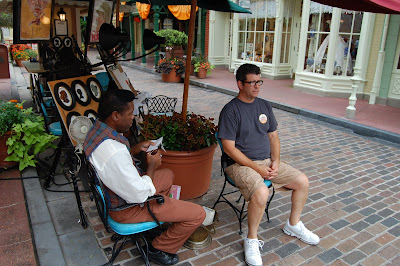 The interesting differences about the silhouettes. First of all, they were outside in a cart. Kind of like how the artists are sitting around New Orleans Square at DL. It was a little odd feeling sitting outside. I would assume that is really bad when it rains...which is all the time in Florida. And they are not nearly as fast as Sylvia in DL. He took a good 30 minutes to do us all. They seemed to be a outside group cutting the silhouettes and not from Disney. I will say, that since they spend more time, they are much more detailed. So that was a neat thing. And the framing is similar but not the same. They didn't have the same black with gold Mickeys on the frame and the paper did not have the word "Disneyland" (or Disney World) in the script around the mat area. But all in all I was excited about getting this once in a lifetime silhouette! I really don't expect to go back to DW and am very excited to have been able to go once an have a thing I love so much done there! 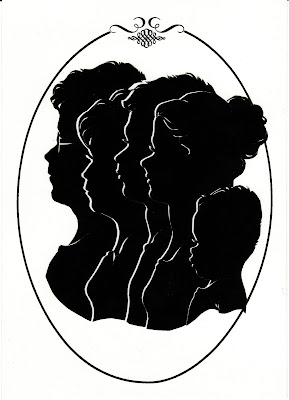 So there we all are! And yes we all had curly hair! The humidity made sure of that! So, we got to The Magic Kingdom at around noon and by 2 or so we were able to get down Main Street! Yeah, we were that slow! This didn't help any... 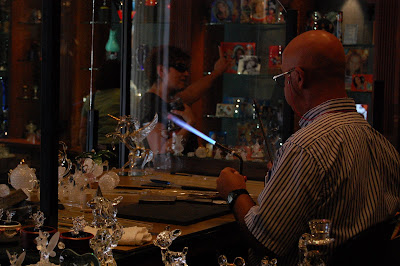 They have a real glass bower! I still remember there being a glass blower in Anaheim inside the castle area! Wow! I wanted to buy something, but I couldn't figure out what to get that would survive the air travel. I wanted to get some Mickey earrings because a dear Friend (who has now passed away) wanted me to get some for her on one of our trips to DL and there were none to be found. She said she remembered the glass blower having earrings in the store that were made of glass. I just could not find any. But we did stop and enjoy watching something that DL had lost years ago!
This post has gotten pretty long, so I will do a second post ASAP. As you can see...we did a lot in a week!

Posted by Pandora Lee Pensiero at 7:12 AM